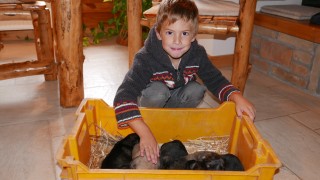 When I write, I have nursed the puppies bottle 10 days.
First 10-15ml 5-6 days to only drank goat’s milk. This quantity is gradually increased to two weeks of age from 50 to 70 ml. 6 am to 22 pm they get to eat five times. Goat milk is consumed year 10,000 people. To date, the longest and largest amount consumed milk type. Several parameter is better than the considerably higher-yielding dairy cows. For the puppy!
For example, that smaller fat molecules easier to digest, so it does not cause bloating, higher contains essential fatty acids, oligosaccharides, which is a compound which is similar to the probiotics keeps the bacteria in the colon, the high zinc and selenium, which strengthens the heart … , .etc., etc..
Several times we were in the Sar Mountains where it comes to feeding dogs. Original habitat is puppies most common dietary supplement in goat milk.

The puppies grow very much! The male is the biggest, strongest and most milk in the shortest time while he absorbs. The females begin to level out. The puppies are eating more than the larger ones. Based on my observation of what is possible because of the greater their mother, Deva right back where elected breasts for milk production. Deva eat three times! A lot. Unfortunately, however, it did not come all the way back to the milk, but it has it. The little ones perform fully, taking care of them, keep them clean. It plays a major role in this case the imprinting period.

Even a few days, and leave the bottle. Puppies bowl to give the first goat’s milk, of course. On the one hand, because it is accustomed to, and secondly, because there is no better natural dietary supplement the puppies, like goat’s milk.