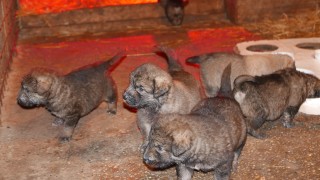 I do not know what I would have been when I grow up. But now ethologist would I be if I could live in it.
When I was a kid, the best of nature films nailed in front of the television.
My grandfather and my father were pastoralists, and because the animals are present on a daily basis
I was in my life, I stayed on the track.
And Sarplaninac breed pigs.
It is interesting how the animals change their behavior at certain life stages.
Deva puppies mother’s example. Dzesika with peace with who came to us in May at the age of 3.5.
Deva is the strongest we bitch, but I would not say that he is the leader of the pack.
In the animal world it can be seen especially predators than to give much more thought out every confrontation, attack, if you are raising puppies, because of the offspring may die if their mother is injured.
Now there is peace instead of snarl break before the two female kennel.
I wonder how long, because each of the dominant entity.
The dog was born predator.
15,000-year-old dog. The man selected by whim, crossed, depending on what you wanted to use it.
No matter when they meet for the first time a dog meat, the meat immediately replaces them in the ancient instinct.
The sooner, the more you eat, preserve, maintain at all costs. The raw meat this is multiplied.

The 9000-year-old domestic pigs. There is a huge genetic progress.
Whether you believe it or not, today’s pigs are fed a vegetarian, are omnivorous, and will remain so.
Today, a large majority of the pig farms through life. Some do not see any straw, or a puddle in the fold for generations.
However, if you are in a place where it is provided, immediately builds a nest of straw before farrowing, and wallowing in a puddle.
Thousands of years did not change the basic behaviors.
What they are kept in the most natural way possible. Our dogs are just living in a kennel while they were eating and relaxing.
In the afternoon two acres, the freedom to travel in packs, and all night guarding perform the task well.

The puppies are now only eat five times. 1000-1300 g grew last week, which is quite normal. Indeed.
The goat’s milk still love more than power. Unfortunately, they eat a diet three times, and twice milk.
This is because the milk of goats drowned. Fewer and fewer of their milk, but more than fat.
In order to eat a better diet, cooked shredded meat mixed into the feed.
Success will come soon!
Already attention to the behavior of puppies, since they eat bottle.
The most important things to take notes. For now, the eating habits of the observations are concentrated.
The result was more important events …