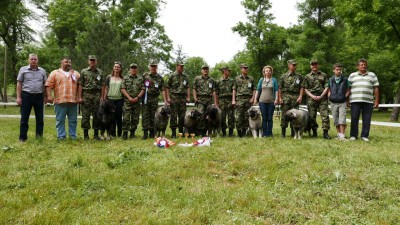 The first time i went to a Special Exhibition for Sarplaninac to Serbia was in 1998 but i have not been in Nis until now. I knew that the sarplaninac breeding was strong in Nis so i decided to visit the exhibition with Karabas, to see what we can achieve.
The quality of the dogs was avarage. The show was not too well organized and the atmosphere was far too familiar. Buddies everywhere, to much fraternization. The quality of the females was higher and better then the quality of the males. The army from Nis – They have seen better days…- exhibited a few dogs too. I saw them in Smederevska Palanka in 2014, they were not too successful… At the end my Karabas gained the 4. position in the „lion’s den”.
The Cacib was kept the next day. The lineup was more or less the same, we finished second.