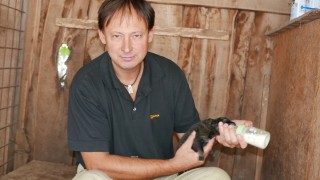 Nursing bottleDeva only had six puppies.
One male and five females.
They were two days old puppies, when the first two puppies died.
The newborns in the first days of the highest mortality.Besides, I had been selected, but I did not know why, because as the newborn pups were not great white markings or genetic damage, which is a matter of selection.So I waited for life to take a difficult decision for me, and do not wait long.
At the kölyöknél first two are suspected repression, because two days have been common.

The female is very out of breath and I was not striking, because it was 35 degrees Celsius.
However, the sudden increase in water demand. The fourth day drinking eight liters and another two small perished.
Deva is the only bitch whom many days it impossible to reach. So I could not give him an oxytocin after farrowing, which would have facilitated the amniotic sac from escaping.
Because that was the real problem remaining in the amniotic sac.

Now, however, I may have affected the 2nd day when I thought it odd too …

He had a fever, but did not appear on nose and the little ones are breast-feeding
but I was so impressed that I did not realize that something was wrong ….

The 4th day received antibiotics, oxytocin, algopyrint because of fever was 40.2 degrees.
Then the bitch was quickly restored, but there is little breast milk.

Oxytocin tried to make milk, more often looked at the puppies, I helped them in the chest to get each one of the few. Sorry I’m late. Again.
Another boy died.

I had no choice but to urgently look after the goats’ milk.
5 days old started to breastfeed them … nursing bottle.